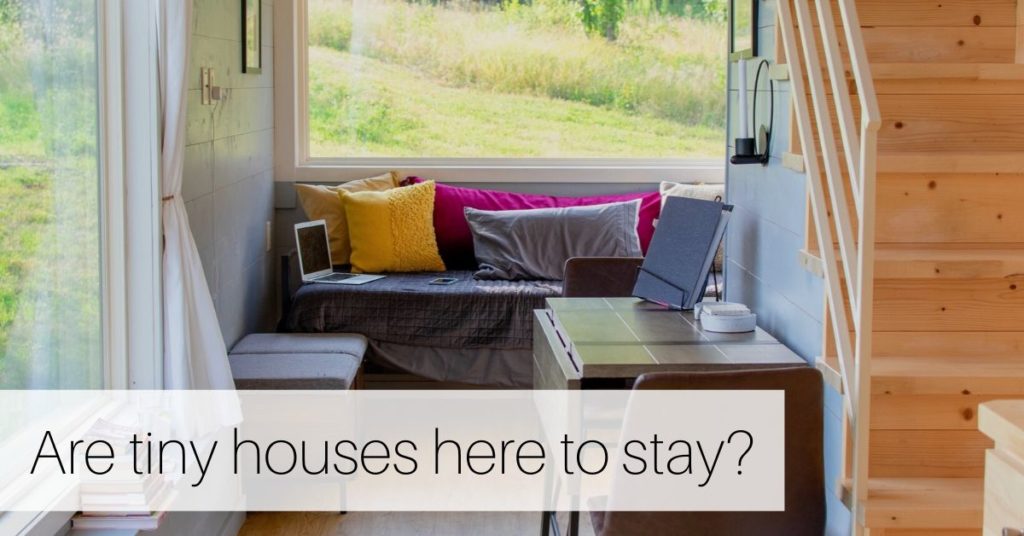 Are tiny houses here to stay?

Tiny homes are seeing rising popularity among Millennials, many of whom are facing unaffordable housing prices and gig-economy jobs with unpredictable income. It’s no surprise they’re looking for innovative ways to set up a house. Tiny homes are marketed as an affordable way to achieve this. But what are the pitfalls, and are they everything they’re cracked up to be?

Lessons from across the pond

Some proponents love tiny houses because they’re aesthetically charming. Others say the pint-sized dwellings solve a host of modern problems, from housing affordability to hoarding. They’ve even been hailed as an antidote to construction noise in residential areas (the dwellings are made remotely and then hauled into place).

In fact, according to Industry Minister Karen Andrews, the sector currently makes up about three to five per cent of Australia’s $150 billion construction industry. Andrews believes that figure may grow to 15 per cent by 2025.

They’re aesthetically charming and solve a host of modern problems, from housing affordability to hoarding.

Housing Industry Association’s Chief Executive for Industry Policy, Kristin Brookfield, says it’s difficult to provide firm statistics about the popularity of tiny houses in Australia because the dwellings occupy a “grey area” between caravans and houses.

She says her organisation doesn’t yet know whether tiny houses should be required to meet all the current National Construction Code requirements for dwellings or whether they should be regulated like caravans.

There isn’t even a universal definition of a tiny house, says Brookfield, although ATHA says they are “moveable dwellings up to 50sqm” that are mounted “on wheels or on skids.”

This lack of clarity means it’s hard to predict what rules and regulations may apply to these dwellings in the future.

“The fact is that a lot of the rules governing tiny houses have yet to be written,” Brookfield says. “What the market for tiny houses might look like in five or 10 years’ time will be affected by a whole lot of real-world stuff that gets in its way.”

Brookfield says the top concern for most prospective buyers is whether they will be able to install their tiny houses on land that is currently zoned for residential use, such as a relative or friend’s yard.

In most of Australia (excluding Victoria), it is relatively simple to add a second dwelling – such as a granny flat – to a block of residentially zoned land. But restrictions apply to second residences on wheels, such as caravans, says Brookfield: these dwellings cannot be permanently in place.

The problem is that tiny homes can be classified as either houses or caravans, depending on your council’s perspective, says Brookfield.

Even if the block of land is vacant, council rules may mean you are not able to install a dwelling on wheels there permanently.

“A lot of these scenarios have yet to be tested before local councils,” she says.

“Trading up” from a tiny house to a more conventional permanent dwelling could be tricky – the value of miniature homes actually decreases over time.

In the United States, tiny houses gained popularity in the wake of the Global Financial Crisis, when thousands of first-home buyers defaulted on their mortgages and became homeless. For many young Americans, buying a tiny house seemed like a way to gain a foothold on the property ladder.

But “trading up” from a tiny house to a more conventional permanent dwelling is proving tricky for some American owners, who are finding that the value of miniature homes actually decreases over time instead of rising like conventional property values reliably do.

As Brookfield explains, that’s because the most valuable component of most property transactions is the land on which the dwelling sits, not the dwelling itself. And owners of tiny houses rarely own the land beneath their wheels.

A hurdle for young buyers is financing. Although tiny houses can cost up to $100,000, Brookfield says lenders may be reluctant to offer conventional home loans for them, treating them instead like vehicles, which are more expensive to finance.

Brookfield believes the state of the Australian housing market will continue to drive interest in tiny homes. “Housing affordability remains a real issue in Australia,” she says. But it’s too early to say whether tiny houses are the best solution. “We will need to jump a lot of hurdles before this class of property can be considered a mainstream option,” she says.